You are here: Home › Åhlens to close all stores in Norway – Lagerhaus to replace
This is a backup version of ScandinavianRetail.com 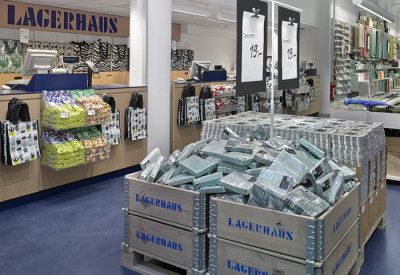 The largest Scandinavian interior and department store chain, Åhlens, will close all 30 stores in Norway within two years.

”It is the continuing priority of the Åhléns department stores that are the basis for the decision to close down the home furnishing stores in Norway,” says Gregg Mowins, CEO of Åhléns AB.

Åhléns has decided to close its home furnishings stores in Norway., stating the background is an enhanced department stores focus on the Swedish market. The closing process is carried out in stages during 2015-2017 . The first of currently 30 stores opened in 1998.

”We have long existed in Norway, and it has been a tough decision, with consequences for our Norwegian colleagues. At the same time, we have developed and strengthened our department store concept in recent years, including through investments in fashion, home, beauty, and soon e-commerce as we launch next year. Departments stores are the core of our business. This is where we put our focus and it is the continuing priority of the Åhléns department stores that are the basis for the decision to close down the home furnishing stores in Norway,” says Gregg Mowins, CEO of Åhléns AB.

A variety of shops will close in August-September this year and a few more in the beginning of 2016. The remaining stores are shut down within two years. Earlier this year, a city store in Tromsø was closed.

Åhlens actively initiate and encourage their premises to be taking over by other players.

Åhlens in Norway have a smaller concept, mainly interior design, than in Sweden where it in many locations is a full assortment department store chain

270 employees are affected by the closure, and risk losing their job.

According to Aftenposten, another Axstores chain, Lagerhaus, will take over some of the premises. Market director Johanna Cargioli confirms at least two stores will be converted to Lagerhaus. Lagerhaus is a nationwide interior design chain in Sweden, but so far only has one store in Norway, at Strømmen Storsenter. Lagerhaus will replace Åhlens in the Grensen-store in Oslo and in Storo. Further plans are not official.

”We want our stores to become showrooms for our online offer,” Johanna Cargioli tells Aftenposten.

Åhléns has 77 stores in Sweden and 32 stores in Norway. It’s been established in Norway since 1998 and has been profitabel for the last three financial years.

ScandinavianRetail.com has tried to reach Åhléns and Axstores for a comment.