You are here: Home › Elkjøp aquires Danish electronics chain Fona
This is a backup version of ScandinavianRetail.com 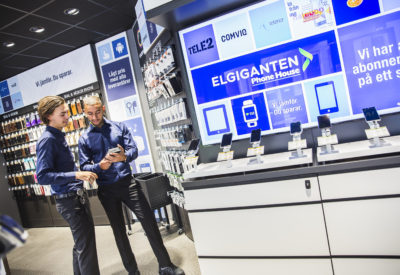 As expected – Elgiganten takes over Fona’s brand and operations in ten stores in Denmark with plans to turn it into a multichannel city concept under Elgiganten’s label.

”We have good experience from Norway and Sweden, with shops in the city center, and therefore we are happy with this agreement, ” said Jaan Ivar Semlitsch, CEO of Elkjøp Nordic.

Scandinavianretail.com has previously written that Elgiganten most likely would be interested in establishing a city concept from the remains of the Fona-chain.

Now Elkjøp Nordic takes over the shops of Strøget in Copenhagen, Fisketorvet, Frederiksberg, the Nørreport and Østerbro. Also the shops on Strøget in Aarhus, in Lyngby, Rødovre, Hørsholm and Aalborg will survive.

So, only ten out of 56 Fona-stores will survive. The rest will close before the end of  May. Owner Dixons/Elkjøp Nordic is both a winner and a loser as Dixons has owned 40 percent of Fona since 2006 with a former possibility to buy all remaining shares. Elkjøp has also been the main supplier to Fona, recent year.

»Fona has existed since 1926. We are pleased to continue several of Fonas flagship stores, and not least that we can offer their skilled employees further employment,” said Semlitsch.

The acquisition of the 10 Fona stores yet to be approved by the competition authorities.

After the merge between UK owner Dixons and Carphone warehouse, the cellphone specialist PhoneHouse in Sweden has been turned into a mall and city center concept under the label Elgiganten Phonehouse – and the Norwegian Elkjøp Express has also been converted into Elkjøp Phonehouse.

A difference between Fona and Phonehouse is the size of the stores, which may explain why Elgiganten did not go for a larger package. Jaan Ivar Semlitsch tells dr.dk that they have have bought the Fona brand but it won’t stay on the stores.

”They will wear the Elgiganten brand as it will be us overtaking the stores,” Peder Stedal, Elgiganten country manager in Denmark, tells Ritzau.

“We follow the trends and patterns close and sees special city customer wants to be able to buy electronics in the city center. The acquisition of Fonas shops complement our offer, “says Jaan Ivar Semlitsch, in the release.