You are here: Home › Elkjøp sold for 25 million first night of Black Friday
This is a backup version of ScandinavianRetail.com 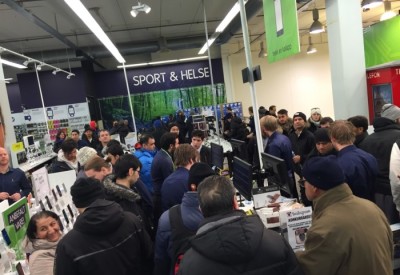 Despite server capacity problems within the Elkjøp Group at the start of Black Friday – the Norwegian online sales reached 25 million NOK from bedtime to breakfast.

Although the Norwegian branch declared a Black week – the trading phenomenon Black Friday started for real at midnight for the whole Elkjøp and at 05.00 the Group had already traded electronics for 25 million NOK. Even though at least the Swedish site had problems for the first hours.

”We’ve already had about 400,000 visitors on our website and at an exceeded revenue of NOK 25 million at 5 a.m must be regarded as a very good start. It is actually an increase of 70 percent compared with the same hours last year. This is going to be an incredibly fun and hectic Black Friday,” says Norwegian CEO Atle Bakke in Elkjøp.

The electronics retailer has worked hard in recent weeks to prepare the sites for all the expected traffic.

”We have tested our systems so that they can withstand up to 400 percent of the traffic we experienced last year. Still, I know that internet team brought mattresses to the office and stayed there, in case any trouble occurs,” says Bakke.

Electronics chain CEO says the extension to Black Week comes after a tremendous response last year, ans it’s better for customers when deals are spread over several days compared to squeezing everything on one day, and by that avoiding large queues and crowding.