You are here: Home › Jula made over half a billion profit
This is a backup version of ScandinavianRetail.com 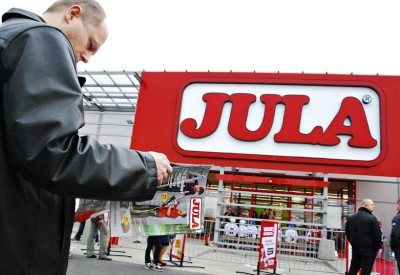 Jula had a tough year – but still makes good money in Norway.  Profit before tax totaled 84 million NOK from a turnover of 1.7 billion .

”The result indicates financial strength. We manage to make money in a tough climate. Meanwhile, the competition becomes more intense, and there are many challenges that we have to tackle in the long term. The result gives us better conditions and scope for future,” says Per Jacobsen, CEO Jula Norway.

The same quote that was put in the mouth of Group CEO Joachim Frykberg a week ago. Then it was revealed that the total revenues for Jula Group came to 5.9 billion SEK, with a profit of 638 million SEK (of which 143 million SEK paid in taxes).

The increased dollar has affected purchase prices, particularly in the past year,

”We are constantly working with currency and commodity prices, and the result shows that we have succeeded reasonably well with it, says Per Jacobsen – and Jula owner Karl-Johan Blank..

A major restructuring of the Jula group has been made. A new parent company, KJB Holding, was established with the aim to continue to develop the Group. Dividends within the Group is now moved upwards and lands in the new parent company. This has now resulted in Karl-Johan Blank being the sole owner of Jula.

”With KJB Holding, we have now built a chance to move forward and create a wider group with several legs to stand on. Several companies can balance each other and thus, among other things become less monetary and cyclical,” says Karl-Johan Blank.

Jula Group has its headquarters and central 150,000 sqm warehouse in Skaraborg.

The company took the step into the Norwegian market 2008, and into Poland 2011.

”We have unfortunately remained difficult with profitability in the Polish market. In 2016, we focus strongly on reaching black numbers,” says Joachim Frykberg.