You are here: Home › Kasi-Jesper bought out of Endless Jewelry
This is a backup version of ScandinavianRetail.com
By admin on February 4, 2016 in Accessories, Denmark, International, People

The jewelry retail entrepreneur Jesper Nielsen steps out of Endless, the company he founded in 2013, after internal disputes.

The other shareholders buy his stake in the company.

”I am extremely proud of what we have accomplished with Endless Jewelry. Together we have made history, and you have all been amazing and an important part of this. Thank you!”, says ”Kasi-Jesper” on his Facebook page. 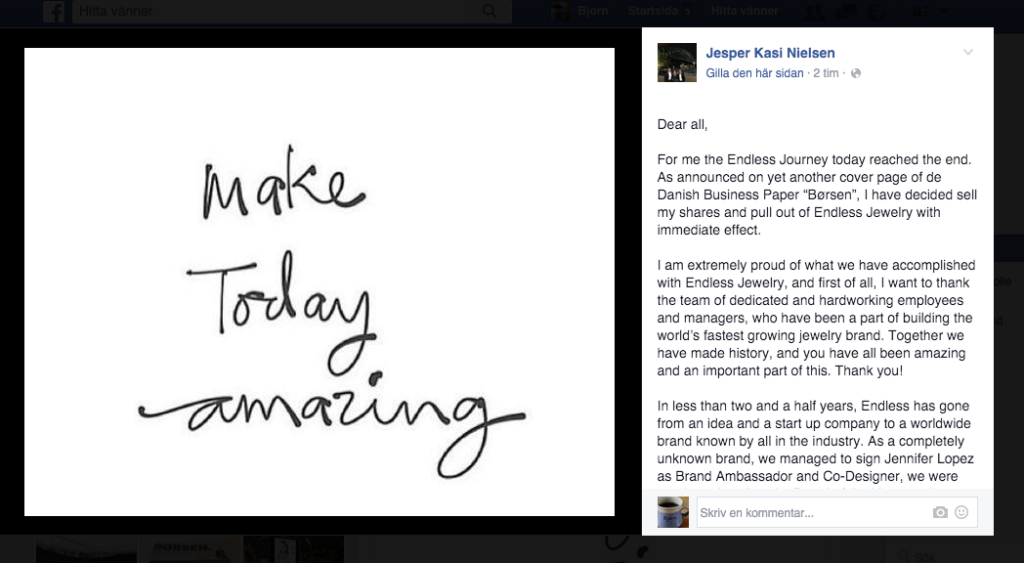 Jesper Nielsen, known as Kasi-Jesper in Denmark, is a controversial entrepreneur and former major owner of Pandora. In 2010 he sold his share in the well-known accessories company for 385 million DKK, but is still in legal disputes over money after his exit.
In 2013 he established instead Endless Jewelry that sell bracelets and so-called charms through approximately 3,000 dealers in 31 countries on five continents.

Last year, there has been disputes between Kasi-Jesper and the Endless board and management.  It stems from that Jesper Nielsen has provided a number of its distributors all over the world the ability to return unsaleable jewelry back to an extent that his successor as CEO since last summer, Paul Moonga, called “significant” . The company now might have to correct the annual turnovers for the company.

Jesper Nielsen has after this been on a collision course with the company’s other owners who wanted him out of the board and deprived of the right to represent Endless to customers worldwide.

Now he’s been bought out. Børsen writes that the existing shareholders, consisting of people like Saxo Bank owner Lars Seier Christensen, bought Jesper Nielsen’s stake of about 18 percent for an unknown amount.

Just two weeks ago Jesper Nielsen stated his role was extremely important for the whole company, partnership, distributors and employees. Now he says that his decision to break with Endless “also occurs in respect of the new leadership, which must have space and time.”

“We agreed on the agreement Wednesday evening”, says Lars Seier Christensen to Børsen.

Jesper Nielsen is thereby leaving the board and interrupts all cooperation with the jewelry company which he founded in 2013.

He also made an announcement on his Facebook page that has almost 10000 likes:

”As announced on yet another cover page of the Danish Business Paper “Børsen”, I have decided sell my shares and pull out of Endless Jewelry with immediate effect. I am extremely proud of what we have accomplished with Endless Jewelry, and first of all, I want to thank the team of dedicated and hardworking employees and managers, who have been a part of building the world’s fastest growing jewelry brand. Together we have made history, and you have all been amazing and an important part of this. Thank you!”