You are here: Home › Kfem’s turnaround – now fully leased again
This is a backup version of ScandinavianRetail.com 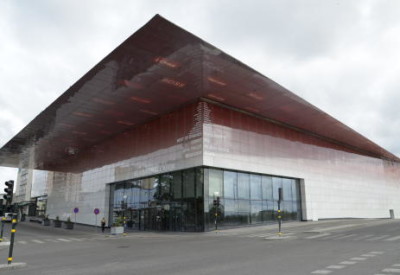 Kfem (K-five) in Vällingby west of Stockholm was known as a beautiful but troubled mall.

Now a three year long turnaround plan is on the finish line as property manager Newsec announces it is fully leased – with 2000 square meters more leasable area than before the renovation.

The architectural external design by Gert Wingårdh has been internationally awarded, but the mall in Vällingby city centre had trouble with the footfall almost from the start in 2008.

In 2012 began Newsec, along with the property owner Svenska Bostäder, the work to create a long-term plan for the development of Vällingby City in which Kfem’s future has been a central part. The mall had to be better integrated with the rest of Vällingby. New entrances was one of the first things to do.

It was also soon clear that the upper level would be filled with the larger anchor tenants in 2-level solutions while the ground floor housed a number of small shops.

“We have worked in a focused and strategically to get the right mix of shops in Kfem. We have filled the house with good retailers and we are already seeing a strong growth in sales of tenants and good visitor numbers. With the new venture as Intersport do in Vällingby, in a new venue and an expanded product range, our offer will be further strengthened, “says Newsec’s Peter Appelgren, Centre Manager of Vällingby City.

Last year, H&M and Stadium was announced as anchor tenants. Newsec has now also signed a five-year lease agreement with Intersport for 1575 square meters in Kfem. Planned opening of the new store is in the middle of March 2016. Together with Best of Brands’ extra premises this means the property is now fully leased.

“In our new store in Vällingby we have the opportunity to create a spectacular experience. We will also expand the range of bikes, as we see the need for a strong bicycle dealer in the area, “says Ulf Kinneson, CEO of Intersport.