You are here: Home › Lidl: This is how we’ll use yesterday’s party in our marketing
This is a backup version of ScandinavianRetail.com 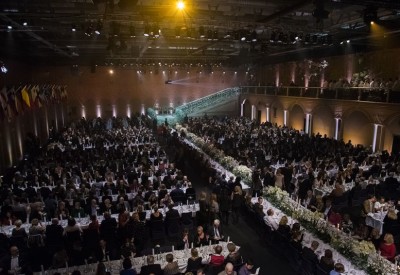 By admin on December 11, 2015 in Advertising, Groceries, International, Marketing, Sweden

The Nobel party is over. But for Lidl it has just begun.
An entire marketing budget was hanging on to yesterday evening being a great success.
The marketing manager Caroline Forsshéll now tells ScandinavianRetail.com how yesterday’s Le Bon banquet was documented and will be used in marketing for at least a year forward.
“It was an amazing thing. Everyone was overwhelmed, “she says.

Lidl invited to a 1300 people’s banquet at arena Annexet in Stockholm, in parallel with the Nobel banquet in City Hall a short distance away.
It was a carefully planned event with a strong focus on social media. There were a lot of famous blogger among the guests – and comedian and now opinion-builder Henrik Schyffert acted as Head waiter. The viral spread is becoming increasingly important.
“That’s the whole idea behind our new concept,” says Caroline Forsshéll.
Additionally , the event aired on two occasions during the evening in a kind of live-advertising on Swedish TV4.

The big bet in addition to undertaking dinner with entertainment, was to document everything for use in marketing.
Starting tomorrow, Saturday, begins the campaign in newspapers – and on television and online. The first week is about to explain the concept that they had implemented. Online, interviews with guests will be published and the recipes of the food served available.

Then a more niche advertising message to sell specific products and brands will take place. The marketing manager Caroline Forsshéll mentions the the Swedish striploin and dairy brand Ängen will be in focus.

“We have used the documentary filmmakers during the evening, to ensure the filmquality” she says to ScandinavianRetail.com.

She has been praised as the marketing manager of the year in Sweden and advertising concept Dill, where a casual restaurant with a star chef in the kitchen was built, has won several awards.
This was the great sequel, called Le Bon.

The concept Dill was a game with its own brand – and the letters in the Lidl-logo.
Le Bon is a play with another brand, the world famous Nobel Prize and its large banquet that took place at the same time.

Caroline Forsshéll deliberately avoid saying Nobel and call it instead ”the other party”.
“We have been inspired from elsewhere too. There is much that is different. And Le Bon means The good. I have not heard that the Nobel organization would have some comments on that. ”
Meanwhile, she notes that Lidl has obviously researched the legal position in advance.

Dill concept was copied in some other markets, but Lidl Sweden is working independently in the Group and Caroline Forshéll think it is because every market has diverse challenges. In Sweden, it has mainly been about to point out the quality of Lidl’s range.

A feature of Lidl Sweden is that Dill was an untried venture that filled up an entire year’s marketing budget.
It is the same with Le Bon, the venture fits in the annual budget but there will not be much over. Caroline Forsshéll says that the budget for 10 December corresponds to the annual consumption of movies. If something goes wrong, it would have become a very expensive lesson.

How is it to put all your eggs in one basket like this?
“Very nervously.

How will you top this?
“I think we asked ourselves that question after Dill too, but it seems to have gone well.”

The party went on until 00.30 – the dinner was accompanied by live artists and a DJ.