You are here: Home › S Group’s price war gained more customers, but less profit
This is a backup version of ScandinavianRetail.com 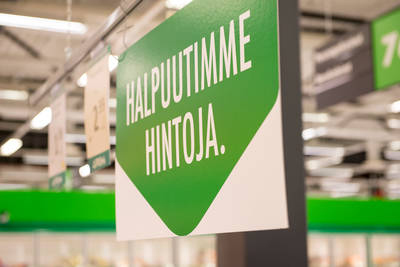 “Since the grocery price reductions began in January, the trend in customer numbers and sales volumes has been excellent – even better than we expected. However, it is clear that lower prices result in a lower value of total sales over the short term,” says Taavi Heikkilä, CEO of SOK.

The decrease is explained by price reductions, the weak economic situation in Finland, and general development in its business sectors.
Comparable sales fell by 4.7 per cent to EUR 2,468 million. Groceries are S Group’s largest line of business, and their sales decreased by 1.6 percent from the previous year, even though the price reductions implemented in early 2015 had a positive effect on S-market stores.

S Group’s hotel and restaurant business recorded the smallest relative decrease in sales. Its sales totalled 229 million EUR, which represents a decrease of 1.0 percent and a comparable decrease of 0.1 percent. Sales at hotels increased by 1.1 percent.

The ABC chain’s total sales were affected by markedly lower market prices for fuels than in the previous year. This decrease was partly offset by investments in the quality of the restaurant trade, which increased restaurant sales by 3.0 per cent in early 2015. The ABC chain’s sales for January–March totalled 345 million EUR, representing a year-on-year decrease of 13.5 per cent.

In line with the general trend in this line of business, sales of consumer goods decreased in early 2015. Overall, S Group’s consumer goods sales decreased by 8.0 per cent to 265 million EUR. The decrease in sales of Sokos department stores and specialty stores was 9.5 percent. Beauty and fashion sales for all of S Group’s chains increased during the first three months of the year. Fashion sales recoded an increase of around 7.4 per cent. S Group’s hardware chains, Kodin Terra and S-Rauta, recorded the largest decrease in sales: 15.7 per cent.

Some S Group cooperatives engage in automotive and automotive accessories trade. Their sales for January–March 2015 increased by 3.4 percent to around EUR 82.5 million.

“We will continue to implement our strategy for the rest of the year. We will operate in accordance with the basic principles of cooperative activities by systematically continuing to lower prices and further develop our product selections. By enhancing our efficiency at the same time, we will be able to continue to operate profitably, just as we did in the first three months of the year,” says Heikkilä.