You are here: Home › Stockmann reports strong Crazy Days in fashion and food
This is a backup version of ScandinavianRetail.com 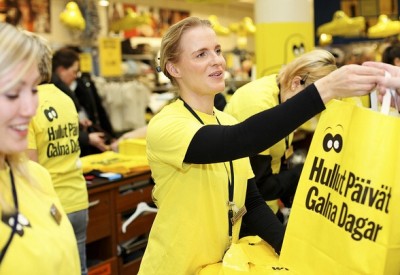 The weak Russian rouble continue to affect Stockmann’s turnover – but even in local exchange rates and excluding product categories that Stockmann has outsourced. The department store sales were down in September.

On the other hand, fashion performed better than the market. And Stockmann’s traditional October sales week, Crazy Days, was more succesful than last year – in Finland.

In Finland, sales were down by 11.3 percent. The decline was mainly due to withdrawing from the own electronics product category. Excluding electronics, department stores’ sales were down 4 per cent. Stockmann’s sales in fashion were, however, better than the weak general fashion market development.

Lindex’s sales were up 6.9 percent at comparable exchange rates. Sales increased in most of the markets, and particularly well in the biggest market, Sweden. Euro-denominated sales were up 3.9 percent.

The Crazy Days campaign was held in the Stockmann department stores and online store on 7–11 October. Campaign sales were up 4.0 percent at comparable exchange rates, excluding the product categories from which Stockmann has withdrawn (electronics and books). Sales performance was particularly strong in Finland both in online and department stores, and fashion and food achieved the best growth of all product categories.

Sales (exclusive of VAT) in September

* Includes Seppälä until 31 March 2015.
Change-%: change compared with the corresponding period of the previous year.