You are here: Home › Stockmann’s Crazy Days dropped 3%
This is a backup version of ScandinavianRetail.com 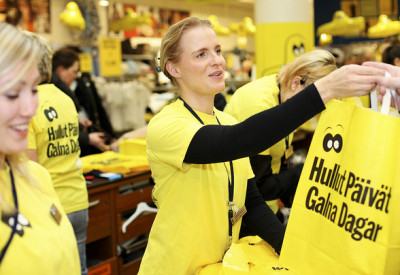 With change of month for the Crazy days campaign, the Stockmann Group’s sales in March were down by 26.9 percent and amounted to 84.0 million EUR in the continuing product areas and businesses.

Without the campaign effects, the sales seem to have dropped 1.4 percent. And the Crazy days held in April dropped 3 percent compared to last year.

Lindex sales were on par with last year.

The change percentage is not comparable, as the decline was due to the timing of the Crazy Days campaign in Finland. This year the campaign was held in April, instead of late March as in the previous year. During the first three weeks in March, the Group’s comparable sales were on a par with 2015.

”Lindex continued its solid performance and grew particularly well in its main market of Sweden in March. In comparable terms, Stockmann’s department store sales turned into a more positive direction. The sales during the first three weeks of the month grew in fashion, cosmetics and home products. The same product areas had also a positive sales trend during the Crazy Days campaign which continues to attract customers and reached over one million customer transactions during the five sales days. Due to the different timings of the campaign between 2015 and 2016, the sales figure for the total month is not comparable”, says Stockmann’s interim CEO Lauri Veijalainen.

Lindex’s sales were on a par with the previous year at comparable exchange rates. Easter had a somewhat negative effect on sales, but despite this, sales increased in Sweden, Estonia and Latvia. Euro-denominated sales were down by 2.5 per cent, or up 1.9 per cent excluding Russia.

The Crazy Days campaign was held in the Stockmann department stores and online store on 6–10 April 2016. The comparable campaign sales were down by 3 percent. Sales were down by 3 percent in Finland, and down by 1 per cent in the Baltic countries. Campaign sales increased in fashion and cosmetics, but decreased in food. Sales in the online store were up significantly compared with the previous year.