You are here: Home › Strong performance from S Group
This is a backup version of ScandinavianRetail.com 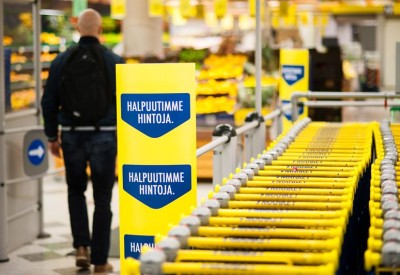 By admin on August 6, 2015 in Buidling and construction material, Department stores, Finland, Groceries, International, Other

”We can continue to cut prices thanks to the moderate improvement in earnings that we achieved through streamlining of operations,” says CEO Taavi Heikkilä.

Thanks to cost savings implemented in the S Group and streamlining of its operations, the operational result of the trade group for January-June increased slightly from last year.

2015 total operating earnings of the S Group in January-June was 73 million euros, compared to 62 million EUR the corresponding period in 2014. Retail sales were 5.2 billion EUR and thus fell slightly from last year.

In January lowered the Prisma chain the prices of over 400 products. In May also the S-Markets and small stores followed. So far about 1000 products has become cheaper.

Heikkilä stresses that the price pressure campaign that started early this yearis a long-term strategic change, which is implemented strictly in accordance with the cooperative intention.

”We are very satisfied with the first phase. The campaign has focused strongly on domestic favorite products, which has turned the sale of the entire S Group’s grocery trade of domestic content upwards in the first quarter.”

The campaign also made the S-Group’s sales volumes increase in Finland, although the grocery prices declined by 0.9 percent year on year.

The S Group’s full-year operating profit is expected to be at the previous year level.

”With the new government’s decisions so far, the consumers’ purchasing power does not get the stimulus it need to supplement the domestic market and the trade would need that stimulus. In the extremely difficult economic situation we could need the awaited social contract, and thereby avoid tax increases and cuts of a half a billion euros. In this situation, such action would be pure poison for the purchasing power and a major hit against the trade. If the social contract is not concluded, we will lose billion in income tax cuts that the government has promised,” says Heikkilä.

The regional cooperative retail sales fell by 3.7 percent compared to 2014. The cooperative societies’ share of sales of the S Group was 93.0 percent, and SOK Corporation’s 7.0 percent.

The largest single project so far this year was the Sipoo grocery logistics center, which was an investment in the first quarter of  62 million EUR. In 2014, the same period investments amounted to 239 million EUR.

The S Group’s retail sales totaled 3 626 million euros in January-June 2015. This include Prisma, S-Market, Sale and Alepa stores as well as grocery with other units in the supermarket trade and consumer goods sales both in Finland and neighboring areas. Sales declined by 2.2 per cent compared to last year.

* Including retail sales in near areas (Baltics and S:t Petersburg).