You are here: Home › XXL to enter Denmark and change management
This is a backup version of ScandinavianRetail.com 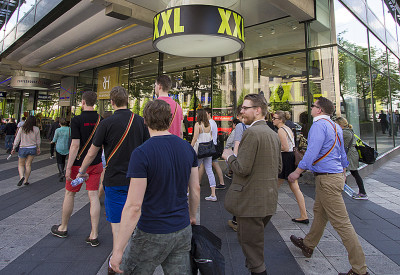 In the first phase – only online.

”We need to market ourselves heavily to be visible in Denmark. But we cannot be market leaders in a country with only an online store, so therefore we need consider Danish department stores too,” said CEO Fredrik Steenbuch at the presentation of XXL:s financial report.

The improved growth is significant online and makes XXL bigger online than pureplayer Sportamore which is already on the Danish market. E-commerce increased by 70.5 percent in 2015. Like-for-like growth for the year equaled 4.7 per cent and 7.7 per cent when including E-commerce.

Finland reported a growth rate of 182.6 percent for the year, Sweden 29.2 percent and Norway 8.3 percent. The growth is driven by new stores opened in 2015, full year effects from stores that opened in 2014, E-commerce and like-forlike growth.

XXL has previously said that Denmark is not on the map. A few days ago, President Fredrik Steenbuch was not as definite about it – and now  XXL announces the chain will launch an e-commerce offering in Denmark in 2016. The launch will, according to the report, be colored by aggressive pricing and high marketing spending and will return negative profits the first years of operation.

Total operating revenue for the Group in January 2016 grew by 29.6 percent to NOK 652 million. The start of the year was impacted by good winter conditions in most of Norway, Sweden and Finland. Conditions that did not continue into February.

She is new CEO of Gallerix
Intersport to open relocated stores